Please note, fishing at these lakes has ceased

2001 was an important year, we confirmed our first case of foot and mouth, we rejected the Niece treaty, and I left home for the first time to spread the wings. I didnt go far mind you, 30 odd miles south, to Co Kilkenny, Thomastown to be precise, Mount Juliet, to be very precise.

Here I started my Hotel Management training, fell in love with 2 sisters, though they never knew, took up golf, as you do, and started probably the best 6 years of my life – Why is this important you ask…. Well, while I was working away in Mount Juliet, something was happening on the estate I was not aware of. Hidden away, but in plain sight of many, diggers and other such earth moving equipment were excavating 3 rather large holes, which were soon to become the Lakes at Mount Juliet.

A club was formed here, and after 6 months the club disbanded due to infighting. The lakes were left alone to die, away at the back of the estate, and that, as they say, was the end of that!!

During my training – I worked in various parts of the estate and in all departments of the hotel, around late 2002 I met a guy called Daniel O’Neill, Dan was working in Mount Juliet House as a porter, but he was into shooting and fishing, often double jobbing to take guests to the banks of the Nore, or clay Pigeon shooting, or off to do some other interesting activity. A real young outdoors man – capable, and eager to learn all around him. I liked Daniel, he was a nice guy, obliging, honest and hardworking.

Fast forward 16 years and the name “Hideaway Lakes at Mount Juliet” starts creeping into my news feed. My ears prick, “Lakes!!! Mount Juliet!!! Fishing!!!! Words that all ring fondly in my ears.

It must be new, I thought….          But apparently not!! apparently they are not new!!! And apparently they have had fish for 17 years, and have not been fished!! Rumors of Carp to 20lb and rainbows to 10lb, fish that had never been caught and went ballistic when apprehended started to become more frequent, So I set out to investigate, and I came upon a name – Daniel O’Neill.

From what I gather, the new owners of the estate had cornered Danny one day he was in, and offered him the job of sorting out the lakes and turning them into a usable amenity for the hotel. Dan accepted, and has worked tirelessly ever since to bring the lakes to the pristine condition we now see them in. 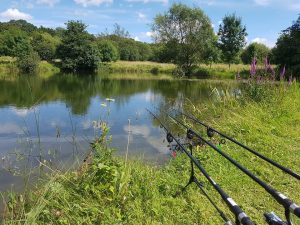 I arrive down on a scouting mission, get directions to water (I had no idea where the lakes were, Mount Juliet was a 1500 acre estate when I worked here, I never came close to seeing half of it!) Directions included one sentance I never heard before – “take the 7th left”, fair enough.

After finding the 7th left, I arrive at water, dismount the Van and start walking, The “top” lake is the Trout Lake, a nice little lake which is surrounded by impeccable reeds and hideaways for fish, with an expansive center and good depth, you can tell just by a look, big healthy fish reside here. Stay looking at the lake for more than a minute and the proof will come to you. The lake is alive with the largest most acrobatic Rainbows I have ever seen. Fish easily to the 10lb mark pole-vaulting up to a meter out of the water with incredible frequency. Massive leaps and crashes, it is quite the sight to behold. 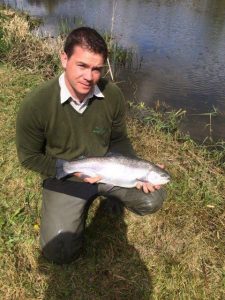 Dan with a nice Rainbow

The 2nd lake is a good size lake, carp to 12lbs, but some elusive monsters perhaps, rumor has it anyway! Common and Mirror. I noticed little activity here, compared to the trout lake I suppose I was hard to impress, a few gulps of the surface film and bubbles to stalk after is all that was available. This is a good size lake and would take some scouting before setting up camp. pegs are nicely cleaned and accessible. the water is healthy looking.

As I arrive to the 3rd lake, I see Dan, and his brother, and son, Dan is raking a swim, cleaning out brush either side of some good lily pad coverage, as I emerge into clearer view, Dan gives one of those looks, and pauses,  ” I know your face ” I hear…  After pleasantries and a catch up, Dan starts touring me around, explaining what happened and how the lakes came to be and how he came to be here manning them! The 3rd lake is the biggest, deeper, to 18ft in parts. This lake contains the biggest of the fish, Carp to 20 lbs, but the lake record is currently 16lb 8oz. The lake also has plenty of Roach and Rudd to 1.5lbs. All lakes contain Gudgeon. 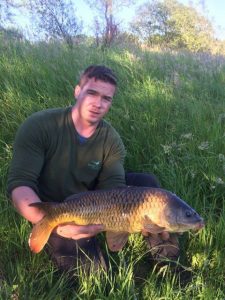 Dan with a small common

As I was only on a scout, I could not have a fish, purposely leaving rod and line at home due to other commitments, had either been available I wouldnt have been able to resist, and would have missed appointments, resulting in divorce. So best to remove the temptation beforehand! 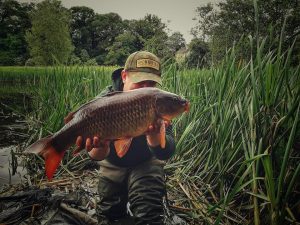 I returned a week later, Rainbows the target, I consulted a friend on flies and he made me up some very flamboyant looking chaps, neon green and sparkly dubbing, tungston beads. Heavy, fabulous flies. I start around 6:30 pm, and by 6:50 im into a weighty, deep diving fish. I feel the fish and lightly slip strike into him, causing complete pandemonium! I have caught lake rainbows to 4lb before, but these were old fisheries, containing weak, fed up fish. This fish however felt like it had a cocaine issue. and after less than a minute of furious diving and turning and sprints, he was off, taking my fabulous fly with him!!! 6lb leader. 🙁

I didnt want to go heavier so I go again with 6lb, and get into a smaller, yet equally hyper trout, coming in at 3lb 1oz, a lovely fish to get me off the mark. I gut hooked the fish so chose recovery over a picture.

Things died down thereafter, I fished a few different swims – switched to dries, where my next fish came from – A sedge was presented to the water and left there for an abnormally long period of time while I had a drink and a break. A splash and a swirl jolted me into action, I rose my rod to feel the connection, and after a short but spirited escape attempt I reel in a fish to 2lb 2oz. 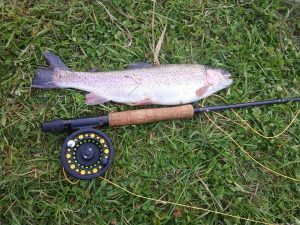 I attempted a few more casts but was tiring, I felt the evening wouldnt be kind, so I moved on. I planned for my next trip for my very first ever carp session. Scanning the two other lakes for clues and cues as to where to start. While I walked, I heard something familiar – flow! I wandered through bushes and brush and stepped out onto what I had completely forgotten was here all along, and where the bulk of the fishing on the estate had been done over the years. The Nore. 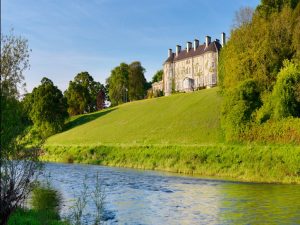 Having become fascinated with these lakes I never knew existed, I neglected to even remember one of the best game rivers in the country flows through this place!! Salmon to 20lb on the Nore have been common recently, with a 23lber taken from the Estates waters earlier this year. Trout to 5lb are not infrequent, but to 1.5lb are the average. A run of sea trout completes the game section of this fantastic river. The estate had always protected its waters, fishermen without permit or poachers were swiftly removed by the on site 24hr security, This has been maintained since I was here, making the waters in the estate a kind of sanctuary for fish to escape heavy pummeling.

Dan now runs the river fishing on the estate also, rates for the year are available on request. 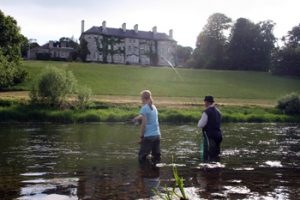 As I watched the river, rises were frequent and strong. A good stamp of fish reside here, I shall be returning for a session or ten on this stretch of water over the coming days. Another report is very likely And im extremely excited about it!

Maybe my fondness for this place has given me a pair of rose tinted glasses, I worked here from barback and accommodation porter right up to Events Manager. But the quality of fishing, the surroundings, the atmosphere, everything, makes it the complete fishing package that should not be missed.

As I was leaving, the hunger getting to me, I text both sisters for a recommendation, Dino’s or Central?, I asked, referring to the best chipper in town to fill the hole in my stomach – I think one of them removed me from watsapp!!! Not sure why, I presume because we havnt spoken in about 10 yrs and she hadnt a clue who was asking – the other, simply replied “Central” She was not wrong, the best chips I have had in years bar none. Nice one J!