Mayfly madness. Duffer’s fortnight. Call it what you will but May is one of the most spectacular months of the year to visit the rivers when the Ephemera danica or Mayfly hatches drift across the river like gun smoke.

It is best to divide the month into three distinct portions: the first is in early May when there will be the Hawthorn hatch. The third is later in the month when the Mayfly is on. The second, and the trickiest, is that period between the two.

The Hawthorn hatch will have started in April, so the trout will be familiar with them right through the first week of May and even take them when there is no hatch. For the first few days of the Mayfly hatch be prepared for trout to be curious but suspicious of these unfamiliar flies. Sometimes a little ‘twitch’ will do the trick In that week or more that runs up to the Mayfly, don’t get fooled into thinking the trout are just hanging around in anticipation – believe me after a long winter they are hungry for the right offering. Mayfly nymphs are an obvious contender, plus Iron Blue that like to hatch on cold, blustery days with Black Gnats in various sizes and guises the default pattern.

It takes some really bad weather to stop the Mayfly hatch, so don’t be discouraged if the weather is foul. The Mayfly hatch is triggered by seasonal light intensity rather than localised weather. Expect to see the bulk of the hatch from mid afternoon in the early weeks of the hatch, spreading across the entire day in later weeks.

Mayfly patterns are heavy, bulky and wind resistant. Getting them to ‘turn over’, especially in wind can be difficult so use a 5lb tippet as a very minimum. 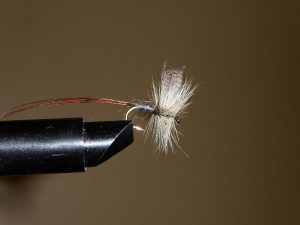